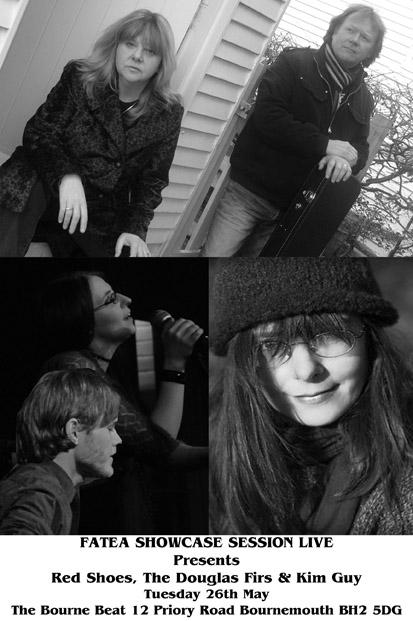 Birmingham based duo, Red Shoes, have just finished recording their new album with no less a person than Dave Pegg of Fairport Convention doing the honours at the desk. If all goes to plan the album will be available for the gig. Expect a setof folk rock goodness,packed full of great songs delivered with passion
www.myspace.com/redshoes1

Kim Guy has already been heralded as 'The Cornish Karine Polwart' and is one of the hardest working musicians in England's most westerly county. As well as her solo appearances Kim is a member of a number of bands and duos and still finds time to co-host Liskard's Barleysheaf Folk Club.
www.myspace.com/wyrdguy

The Douglas Firs have been making a growing impact on the local scene, helped by two well received eps and great performances. As Live Music Showcase said "The Douglas Firs ooze the spirit of the song with every note, enchanting their captivated audience with a perfect blend of stunning vocals, soft harmonies, reflective melodies and thought provoking lyrics. They may already have won Dorset Unsigned Music Award by the time this comes around. They made the final
www.myspace.com/douglasfirsmusic

If you're thinking of travelling, The Bourne Beat does rooms at competitive rates 01202 553319